Vehicle Description
For Sale $97,500 ON SALE
1967 RS Z28 2L 3L 4L MO 302 NUMBER MATCHING MO MOTOR PDBrakes RALLY SPORT Z28
JERRY MCNEISH CERTIFIED
Chevrolet’s records show that 602 of the 1967 MO 302 Z28s Were produced in 1967. with just over 600 total vehicles being produced, the 1967 Bolero Red with White Z stripes color combination was arguably the most desirable; its amazing cowl plenum under hood scoop that could get anyone's attention and was the car to have even back in 1967 when it was built!
The cowl plenum cold air induction gave this car an understated advantage over othe Trans Am circuit cars that is the experience of a life time.
Vehicle Description
This 1967 RS Z28 MO 302/290hp
Engine stamp VO322MO
V=Flint, Mi plant
0322 =March 22,1967
MO= 302/290hp= Z28
7N203640
7=1967 year
N= Norwood Ohio
203640= last 6 this cars vin = # Match 4 speed is numbers matching and very powerful rebuilt and balanced. so it is virtually still new. Out of the 602 built this is one of the nicest 67 Zs left.
Fully restored
1967 Z28 Camaro. REAL DEAL. MO 302 casting number 3892657,
Muncie 4 speed,
12 Bolt 3:73 rear gear ratio ,
Cold Air Cowl Plenum,
U17 gauges,
Z22 Rally Sport.
#195 Listed in the Z28 Registry
Frame off and painted in the original Bolero Red w/ White Z stripes is in great condition. Rubbed and buffed to an amazing shine. The Z22 Rally Sport headlight work great and are completely restored. Rebuilt electric RS headlight motors meticulously restored system. The car rides on the original style 15"x7" Rally wheels wrapped in Goodyear Poly glass bias ply F70 x15 tires. The original M21 4 speed close ratio transmission shifts smoothly and firmly. The positrac 3:73 rear end is smooth and quiet.
The original interior has all new original style seat covers and is finished out in all black. A restored AM radio is in place and working. the interior dome lights are working. Factory original Hurst shifter is in place a perfectly working. The Attention to detail is evident through out this Amazing Muscle Car. IT IS MAGNIFICENT.
The engine received the correct winters intake manifold, factory chrome steel valve covers, and a special order cowl plenum air cleaner system to allow cold air from the cowl/firewall into the carburetor.
www.redlinemusclecars.com
21180 us Hwy 70 Wilson Ok 73463
Fred Murfin 580-221-4326
1967 FACTS
The first Camaro model was the 1967, introduced on September 26, 1966. At the time of introduction, several important options were not available. These included the RPO-Z28 Special Performance Package,
Trans Am racers were production-based cars with engines of 305 cid or less. Chevy worked a forged steel version of the 283-cid V-8's crankshaft into its 327 V-8 to get 302 cid. Big-port Corvette heads, solid lifters, a hot cam, a baffled oil pan, and a Holley four-barrel on a tuned aluminum manifold were specified. Horsepower was rated at 290; it likely was closer to 360.
The 1967 model was the only first generation Camaro to have both rear shocks mounted forward of the rear axle. Later years changed to a staggered arrangement to counter wheel hop. The 1967 was the only Camaro to feature a right-side traction bar, also to counter wheel hop. The traction bar was standard equipment for all Z28 models, and was installed on other high performance models.
The 1967 Camaro was the only Camaro model to have its VIN tag mounted to the door hinge pillar.
At least 1,000 streetable examples had to be produced, and Chevy's tack was to make the 302 part of a Camaro Regular Production Option Code. So low-key was the effort that the car wasn't advertised, or even mentioned in sales literature. The knowledgeable buyer had to order a base 6-cylinder Camaro ($2,466), then scan the order sheet for what turned out to be the most famous RPO in history: Z28.
The package cost $400 and included the 302, the F-41 handling suspension, 15-inch tires on Corvette six-inch Rally wheels, and quick-ratio manual steering. A Muncie four-speed was the only transmission; power front disc brakes were a mandatory $100 option.
" 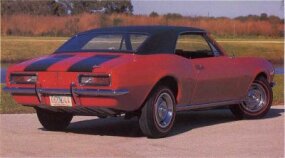 "
©2007 PUBLICATIONS INTERNATIONAL, LTD. CHEVY WAS SO QUIET ABOUT THE Z28 OPTION PACKAGE THAT THERE WASN'T EVEN ANY SPECIAL BADGING ON THE CAR.
RPO Z28 was available on the coupe only and could be combined with the hidden-headlamp RS option group. There were no Z28 emblems on the car, but the package did include broad racing stripes on the hood and trunklid. Camaro's rear lip spoiler was a popular option.
" 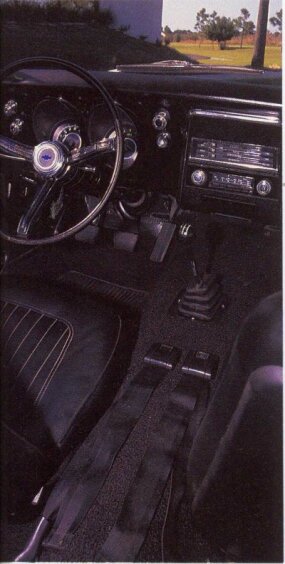 Visit Red Line Muscle Cars online at www.redlinemusclecars.com to see more pictures of this vehicle or call us at 580-221-4326 today to schedule your test drive.

Mileage on any and every vehicle in our inventory more than 10 years old or older is exempt according to Oklahoma State Law, Odometer reading may or may not reflect actual mileage - "sold as is where is Mileage exempt"

Red Line Auto Sports inc. is a family run business, owned by Fred and Kim Murfin Since 1996, we pride ourselves in offering Classic cars that are clean, Good driver quality Classic cars that you will still need to work on and maintain and be proud to own and kool project cars that need work.  With over 20 years of Classic and Muscle Car experience and enthusiasm for this GREAT Past Time, Fred and Kim will personally assist you in finding your next Classic or Muscle car.

Red Line Auto Sports is a small town Classic car dealership. We keep a nice selection of Driver Quality 60s & 70s Collector and Muscle Cars. The fun to drive, muscle cars that the average working person can afford, a car with a good to ok paint that probably won't have the original motor and that's OK. Usually our customer wants to replace the car that they had in high school, and like most of us, they sold to get a family car. We want your business and look forward to meeting and exceeding your expectations. All vehicles are sold As Is/Where Is with No Warranty.  We have Inspected the vehicle and while We find no problem today unless stated in the ad, The only guarantee is that these are used cars and they will break.

WE ARE LICENSED OKLAHOMA DEALERS AND WE ARE HIGHLY REGARDED EBAY SELLERS WITH A 100% CUSTOMER SATISFACTION EBAY RATING.
Redline is located just outside of Ardmore, OK.  We are easy to get to.  We are located 10 miles West of Ardmore, Oklahoma and I-35 between Dallas, TX and Oklahoma City, OK. exit 31B/hwy 70 West 10 miles to Red Line Auto Sports.  Come to the country and $ave. We hope to see you soon. Call us 800 580 9299 Fred and Kim Murfin www.RedLineAutoSports.com.

It is the customer's sole responsibility to verify the existence and condition of any equipment listed. The dealership is not responsible for misprints on prices or equipment. It is the customer's sole responsibility to verify the accuracy of the vehicles description and prices with the dealer. Pricing subject to change without notice. purchaser acknowledges that he or she has had an opportunity to inspect the vehicle and/or sent a third party to inspect the vehicle, or has opted not to inspect the vehicle and in any case is satisfied with the current condition of the vehicle, and agrees to accept it for the negotiated price "AS IS / WHERE IS ",with any & all faults and/or flaws. In connection with the described vehicle, seller expressly disclaims any and all warranties,either expressed or implied, including but not limited to, any implied warranty of merchantability or fitness for a particular purpose. Seller neither assumes nor authorizes any other person to assume for seller any liability in connection with the sale of the described vehicle, vehicle is sold "AS IS / WHERE IS ", Red Line Auto Sports is a licensed Oklahoma Used Car Dealer. All parties agree that this vehicle is sold in Lone Grove, Oklahoma, Carter County and that Only Oklahoma laws pertain to this document. Any Legal actions shall be brought in Carter County court only. The same applies to our websites, www.redlineautosports.com and www.redlinemusclecars.com although they maybe viewed all over the world all parties agree that they are maintained in Oklahoma and only Oklahoma laws apply. This agreement is legal and binding after it is signed by the purchaser and only after Red Line Auto Sports accepts this agreement. Red Line Auto Sports purchases its inventory from private individuals, other licensed dealers, and from auctions. All vehicles were purchased in "AS-IS" condition and shall be sold "AS-IS" as per the terms presented and signed at the time of sale. We cannot and do not represent 100% authenticity, unless it is available. We can only pass along what we are told when we buy the car. We are always happy to show our customers the engine casting numbers, VIN numbers, trim tag, engine block stamping, and transmission and rear end code stampings. We DO NOT GUARANTEE that any part or component is in fact the original or that it is correct for this car. "Numbers Matching" means "Some Numbers May be Matching Now". There is ALWAYS the possibility of re stamped motors, Transmissions & rear ends and as technology improves there will probably be even more. We cannot guarantee the originality of this vehicle or any part on this vehicle, including, but not limited to the engine, transmission, rear end housing, "matching numbers" color changes, data tag, the frame or any documentation. The entire risk as to the originality and the inspection of this vehicle before purchase is up to YOU - the Buyer. Red Line Auto Sports inc. assumes no responsibility or liability for any typographical error that might be found in any of our advertising, including any and all Internet sites. This shall include any and all errors made in the description, color, price, or equipment listed for all vehicles being advertised for sale by Red Line Auto Sports . THESE ARE USED CARS OR PROJECT CARS THEY ALL NEED WORK OF SOMEKIND. Thank You.
Send to a friend
Inquiry
Schedule Test Drive
Make Offer
Printable Brochure